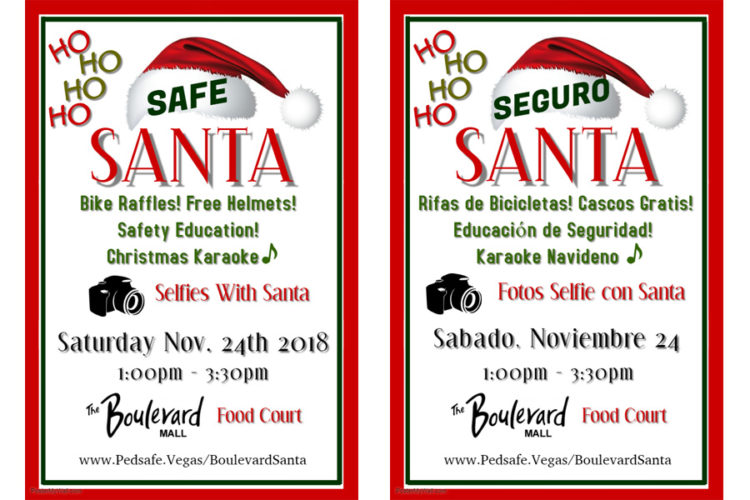 The First Annual Safe Santa rode into the Boulevard Mall on an awesome antique Fire Truck on Saturday, November 24th. Tons of kids were there to see him and tell Santa what was on their wish list for 2018.

Plenty of community partners were there too, to educate these children and families, because at the top of their wish list was ZERO Fatalities and critical injuries this holiday season.

Santa spoke both English and Spanish, and happy parents were able to snap photos of their kids on Santa’s lap, in a huge white, sparkling throne! While some kids waited in line to see Santa, others were visiting the tables of the community partners to get important information, and raffle tickets for the many bikes and other prizes raffled off.

Children were given a raffle ticket for each table visited… and there were plenty of prizes, thanks to wonderful community partners! Sears at the Mall donated two bikes and several $25 gift cards! SeaQuest donated a free entry ticket for each child who visited Santa; this was major fun!  Cinn City Bakery donated goods to raffle and so did the new, innovative HeadzUp Vegas, an experience everyone needs to visit!

Other wonderful community supporters who donated bicycles to be raffled include: Sunrise Hospital and Children’s Hospital, Atkins Global, Sierra Transportation and Technology, the Boulevard Mall and the wonderful Shirley Breeden, former State Senator.

This was an awesome community event and in the end, children and families are safer through the holidays and beyond because of it… so watch for the 2nd Annual Boulevard Santa event in 2019!!