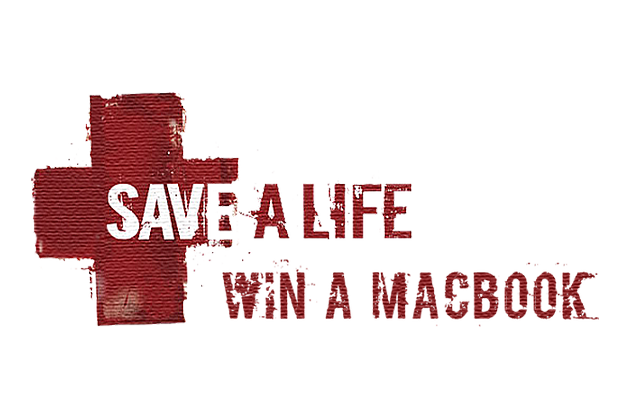 It’s May, and besides the great weather, I love May because we announce the winners of our annual Save A Life, Win A MacBook contest! This is our fourth year of the program and we had a whopping 285 entries!

A panel of eight people judged the entries and had a really difficult time getting posters whittled down to the top 14, which will be featured in a calendar coming soon, thanks to NDOT and the Bike and Pedestrian program, managed by Bill Story.

From the 14 finalists we then have the agonizing task of whittling the list down to the final  two?? (at this stage they are all so good!) After much go around for winners with each judge making a case for their favorite, we chose our top two, first and second place… and we chose three honorable mentions… because it was so hard to let go of favorites!

Then something amazing happened… Angela Nelson of Outdoor Promotions, who own the bus shelters and who was a judge said, “we’ll produce the honorable mentions as our public service messages for the year.” Amazing!! So, the top five posters will be seen throughout the community this year!

Outdoor Promotions is such a great partner! They also donate the MacBook to the winner every year and make the program possible. Then there is the RTC who print second place posters and run them in buses all year to educate riders who then become pedestrians.

Having three extra designers this year is a blessing; but then we thought what to do for the honorable mention artists? So, we called two more great partners: Lotus Broadcasting, who always pitches in said yes right away to helping with prizes. It is a great fit because their new station, ESPN Radio will be covering a lot of high school sports in Las Vegas starting in the 2015-2016 school year.

Then we went to another wonderful partner, Villa Pizza Durango, who have shown in the past how dedicated they are to pedestrian safety in Las Vegas. Owner Donna Botti will be feeding the artists, each with three friends or family at a time of their choosing.

So, now we have the winners and their prizes… and we go back to Villa Pizza, 3385 South Durango Road, on Friday, May 29th to announce the winners and unveil the bus shelter. There is only one hitch… the bus stop at Villa does not have a shelter, only a sign, which is what happens when there is not enough sidewalk to house a shelter and five feet of sidewalk in front of it…hmmm…

This year we will be joined by 16 year old Lexi Jaserie, who was hit crossing Durango at Spring Mountain on November 15, 2014. Lexi was with a friend at Desert Breeze Park and was catching up to a larger group of friends when she was hit. The crash was bad enough that LVMPD Fatal Crash Team was called out to investigate.

Lexi was transported to UMC Trauma and obviously, survived. UMC is another great partner, who works so hard to try to keep people from ever needing their services. Lexi will fill in the rest of the story at the press event and really put a face to the issue of our young people crossing streets.

One in Five pedestrian crashes in Clark County in 2013 involved school age children, which is actually a great improvement from the 31 percent in 2012. It can never be stressed enough with children that they have to follow the rules they have been taught, they need constant reminders, daily. Never assume your children know the rules, so will follow them!

Which brings me another great partner, Look Out, Kids About, which is a great coalition who focus on children getting to school and home safely. They have another announcement for the press event that I won’t spoil here, except to say it will enhance pedestrian safety in Clark County.

And I could never finish this piece without also giving a shout out to Officer Bob Mayer from Clark County School District Police who brings so much education to our community and is a tireless advocate for kids… and to Sherie Moore from the School District Partnership Office who is another wonder and who gets the contest rolling for us every year.

So, please, check back on the 29th to read more about the press conference and see the winners and their art posted!