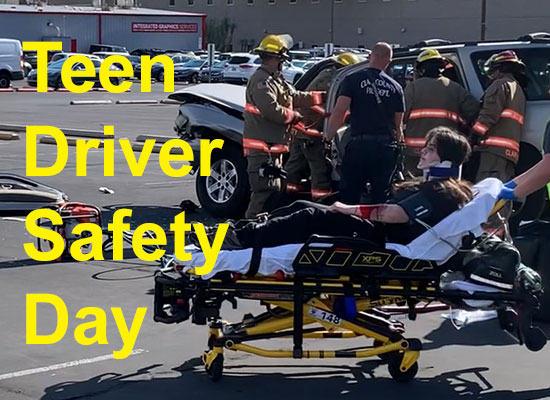 Teen Driver Safety Day was held on Tuesday July 26, 2022. The event was part of the National Summer Transportation Institute, NSTI, funded by the Federal Highway Administration. Campers included teens, ages (14 To 17), from all over the Las Vegas Valley, as well as teens of all ages who came just for the day.

The action-packed session started in a back parking lot of the Thomas and Mack Center. A section of the lot was cordoned off using police tape where the Nevada Traffic Incident Management Coalition, TIM, staged a head-on crash of two damaged SUVs, a drunk driver, and several casualties. The scene was professionally staged by Bill Redfairn, an accident investigation consultant, from Dynamic Safety LLC. Also in attendance were firefighters from the Clark County Fire Dept and an EMS Teams from Community Ambulance and CCFD.

After the casualties were rescued, everyone moved inside to an auditorium at UNLV. The hospitalized patients were then diagnosed by trauma surgeon Dr. Alicia Patterson from Sunrise Trauma Center.

Next, two Metro Police Officers escorted the drunk driver, in handcuffs, to center stage where they explained what happens to someone who causes an accident while intoxicated. The officers explained how the suspects blood alcohol level is tested and the step-by-step process for putting them behind bars.

Then in a mock-trial presided over by the Honorable Suzan Baucum. Retired Deputy DA and current floating District Court Judge, Bruce Nelson, represented the state while Daniel Maul. of the Department of Justice, acted as the defense attorney.  Each side made their case and the defendant was found guilty of drunk driving and sentenced to prison.

After lunch Bill Redfairn was back using math and science to reconstruct what happened in the crash staged earlier in the parking lot, he was joined by two LVMPD Fatal Detail Detectives.

An Impact Panel was convened to help explain more of the personal impacts fatal crashes have on everyone involved and answer questions from the attendees. Joining the panel were:

The day ended with a “Debrief of the Day” where everyone was encouraged to ask questions and share experiences. This is an annual summer event. Teens compete to attend the two-week on campus camp, but all teens are invited to attend Teen Driver Safety Day.