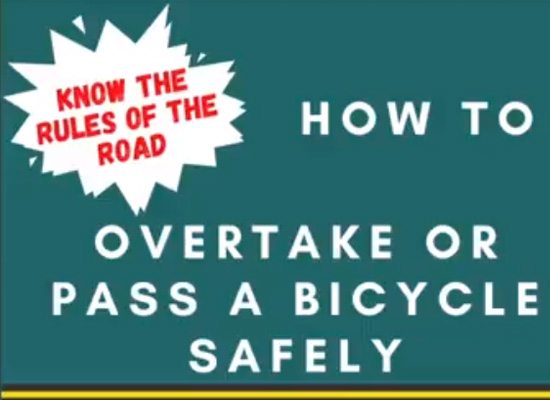 Do You Know What the Law Says?

Local law enforcement will gather tomorrow, 12/30/2020, to educate drivers about their obligation to cyclists on the street. Nevada has a law that requires, at minimum, drivers give cyclists three feet when passing; however, when able, the law says drivers are required to give cyclists the lane. 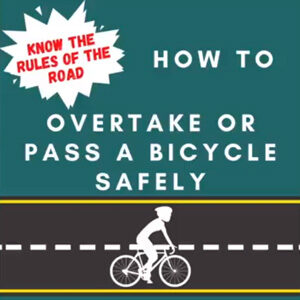 NRS 484B.270 instructs that when available and safe, a driver is to merge left to the adjacent lane to give the cyclist the entire lane, and only when unavailable or unsafe, is the motorist to pull left as far as possible, giving the cyclist at least 3 feet. (as shown is this video)

There have been 9 bicyclists killed in Southern Nevada in 2020, and 11 statewide, making 2020 one of the deadliest years for bicyclists in twenty years. Of course, five of the fatalities happened on December 10th, outside of Boulder City.

High-visibility enforcement is designed to educate the public as much or more than those who receive a citation. Tomorrow we will be helping drivers understand that when they are traveling next to a person on a bike within “falling distance” or three feet, that the vehicle creates a kind of “vortex” that literally pulls the cyclist toward the vehicle.

This is why, when able, drivers merge into the lane next to them to make the cyclist able to stay on the road. Only when on a two-lane road or if traffic is so heavy that there is no room to merge into the next lane, are drivers able to pull as far left as possible.

The decade of 2009-2018 saw traffic fatalities increase 7.9 percent nationally, but Vulnerable road user, pedestrian and bicyclist fatalities grew more than 50 percent! Nationally, in 2018, 854 bicyclists were killed and another 47,000 were injured in traffic crashes, with head trauma leading the way, followed by spine injuries.

In 2018 in Nevada we saw 8 bicyclists lose their lives and over 1,800 treated at trauma centers for injuries sustained in crashes. The other trend Nevada seems to be following is that bicycle deaths for children under 20 have declined dramatically over the past several decades, but for those over age 20 deaths have tripled.

In Southern Nevada we also follow the trend that 58 percent of cycling fatalities happen away from intersections; including, of course, those where a driver strikes a cyclist from behind while in their lane. In our city, six of nine fatalities have happened when the cyclist were struck from behind,

Beginning at 11 am tomorrow, December 30th, along West Charleston Boulevard, Local law enforcement will be backing up an officer riding a specially equipped bicycle that has a laser measure to assure drivers are moving over at least three feet; but officers will stop drivers not giving up the lane when they have the opportunity to do so.

Law enforcement, County Commissioner Justin Jones, Nevada Department of Public Safety, Office of Traffic Safety and members of the cycling community will be available for interview and all drivers stopped will begiven education about the laws for cyclists and other vulnerable road users provided by NDOT’s Bike and Pedestrian Safety Department.

Education, including an educational “how to pass safely” animation is available above and by visiting www.BicycleNevada.com